FIGHT! PALAST #membersonly has its Asian premiere at Esplanade – Theatres on the Bay under the theme of Art& Skin with M1 Singapore Fringe Festival.

Centred around three performers, alternatively playing the same character the artists break out from a three-way narration into frustrating independent stories on the hardships and struggles of being an actor, an artist and a challenged employee of the cultural sector, returning repetitively to the opening trialogue.

PENG! Palast perform for the very first time the full-length piece in English, and the challenge is noticeable when the actors get ambushed in particular words.

FIGHT! PALAST #membersonly approaches a variety of personal problems, such as the inability to sleep and medication leading to addiction. Home remedies and demotivating second jobs soliciting money at a Call Centre on behalf of Charities. The critique is partly on the system, and partly to the people that feed the operation – the contributor feels good donating money for a disaster far away, the skilled creative operator feels soulless as if sucked into a vacuum acquiring sales on behalf of Charities. Too popular of a job for actors looking for income and means to get by in Europe. 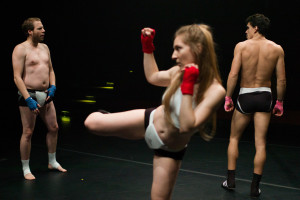 FIGHT! PALAST #membersonly is a highly interactive production where the actors establish casual conversations in the audience seats and mingle with the public, inviting people to come on stage and assemble an IKEA bookshelf while the performance unfolds. Sharing ‘personal’ stories while stripping clothes off to a ridiculous jockstrap over black shorts they return to the core of the play. Fight.

The performance moves forward into an attractive lighting design, shaped like a boxing ring where a kickboxing fight takes place, and evidently, the performers know the martial art, intertwined with more confessions of worry and sorrow the performance finishes on a high satisfaction note. Two guests from the audience destroy the bookshelf down. However, it ‘s hard to connect to this piece that deals with a variety of subjects; perhaps there is an underlying desire to overwhelm the audience with information; an intriguing parallel to our busy digital lives.

Amara – A Preview: Sculpting Intimacy in...

Reut Shemesh ‘my country is a rather...